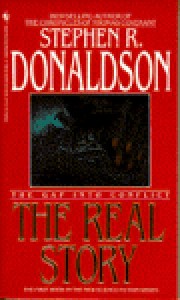 Angus Thermopyle was an ore pirate and a murderer; even the most disreputable asteroid pilots of Delta Sector stayed locked out of his way.  Those who didn't ended up in the lockup--or dead.  But when Thermopyle arrived at Mallory's Bar & Sleep with a gorgeous woman by his side the regulars had to take notice.  Her name was Morn Hyland, and she had been a police officer--until she met up with Thermopyle.
But one person in Mallory's Bar wasn't intimidated.  Nick Succorso had his own reputation as a bold pirate and he had a sleek frigate fitted for deep space.  Everyone knew that Thermopyle and Succorso were on a collision course.  What nobody expected was how quickly it would be over--or how devastating victory would be.  It was common enough example of rivalry and revenge--or so everyone thought.  The REAL story was something entirely different.

I have a negative past with Stephen R. Donaldson’s work. I loathe the Thomas Covenant series and I could only read the first book of the Mordant’s Need duality. I had the second book on my TBR until I realized that the thought of picking it up depressed me profoundly and I decided to let it go.

So it was with distinct reservations that I picked up The Gap into Conflict and no one was more surprised than me when I actually enjoyed it. The subject matter is difficult, but the insights into the main character, Angus Thermopyle, were worth the struggle. And, as Donaldson promises, we get the “real story” about what is going on in his psyche. It’s not pretty, but it is truthful, as he confronts his feelings and admits to himself that he maybe isn’t as rough & tough as he likes to think. It was kind of like getting a peek into the mind of someone like Ariel Castro, the Cleveland kidnapper.

I liked that no character was locked into a role, that everything kept shifting as the novel unfolded. Morn Hyland starts as a victim, but certainly doesn’t end that way. Nick Succorso is set up to look like a hero, but a small foreshadowing by Donaldson indicates that he is no white knight.

I never thought I would ever say this: I’m looking forward to the next book in this Donaldson series!