Help for the Haunted / John Searles 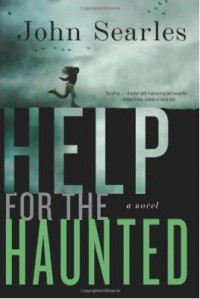 It begins with a call in the middle of snowy February evening. Lying in her bed, young Sylvie Mason overhears her parents on the phone across the hall. This is not the first late-night call they have received, since her mother and father have an uncommon occupation, helping "haunted souls" find peace. And yet, something in Sylvie senses that this call is different than the rest, especially when they are lured to the old church on the outskirts of town. Once there, her parents disappear, one after the other, behind the church's red door, leaving Sylvie alone in the car. Not long after, she drifts off to sleep only to wake to the sound of gunfire.

Nearly a year later, we meet Sylvie again struggling with the loss of her parents, and living in the care of her older sister, who may be to blame for what happened the previous winter.

As the story moves back and forth in time, through the years leading up to the crime and the months following, the ever inquisitive and tender-hearted Sylvie pursues the mystery, moving closer to the knowledge of what occurred that night, as she comes to terms with her family's past and uncovers secrets that have haunted them for years.

I read this book to fill the “Haunted Houses” square of my 2017 Halloween Bingo card.

As in any good ghost story, there is a lot of ambiguity in this tale of family strife and striving. Can Sylvie’s father see ghosts or not? What are her mother’s capabilities? Are they helping people or just fooling their clients and themselves?

Sylvie is a typical “good kid.” She is co-operative, obedient, studious—even when she doesn’t want to be any of those things. And her sister Rose is the typical “bad kid.” She questions everything, does what she wants to, and makes life as miserable as possible for the rest of the family. Rose and their father clash a lot—probably because they are a lot alike. That’s generally how these things work. My father & I butted heads occasionally because we were both quiet people with strong ideas and more that our share of stubbornness. Other than that, I was pretty much the stereotypical good kid, so I could relate to Sylvie quite well.

I had to wonder about what kind of person would choose a career of helping those with supernatural difficulties. Why would you put your own family into such a situation, where your own children often took a backseat to the children of others? It’s almost a truism that preacher’s kids will get in trouble, often as a way to plead for attention from their parents and that seems to hold true with any of the religious & quasi-religious professions.

In the end, it seemed that it maybe wasn’t the house that was haunted, but the family. Haunted by things left unsaid, paths left untrod, people left behind.