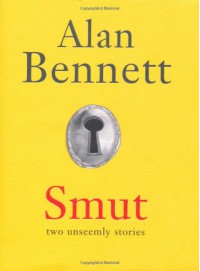 One of England’s finest and most loved writers explores the uncomfortable and tragicomic gap between people’s public appearance and their private desires in two tender and surprising stories.

In The Greening of Mrs. Donaldson, a recently bereaved widow finds interesting ways to supplement her income by performing as a patient for medical students, and renting out her spare room. Quiet, middle-class, and middle-aged, Mrs. Donaldson will soon discover that she rather enjoys role-play at the hospital, and the irregular and startling entertainment provided by her tenants.

In The Shielding of Mrs. Forbes, a disappointed middle-aged mother dotes on her only son, Graham, who believes he must shield her from the truth. As Graham’s double life becomes increasingly complicated, we realize how little he understands, not only of his own desires but also those of his mother.

3.5 stars rounded up to 4 because I’ve always wanted to say that I was reading smut.

My only familiarity with Alan Bennett’s work was seeing the film The Lady in the Van, which amused me greatly. These two pieces of short fiction, The Greening of Mrs. Donaldson and The Shielding of Mrs. Forbes, were also amusing in a somewhat different way. The author admits to using the title Smut to forestall the critics who were likely to label it as such.

Truly not very smutty, these stories are more meditations on our social hang-ups about sexuality and our reluctance to talk honestly about it. I must say that I preferred Mrs. Donaldson because I could relate to her more easily that Mrs. Forbes. I enjoyed how she took two moneymaking propositions and found ways to make them more fun & interesting while also being able to annoy her rather judgmental daughter. Mrs. Forbes, on the other hand, would probably have gotten along with Mrs. Donaldson’s daughter.