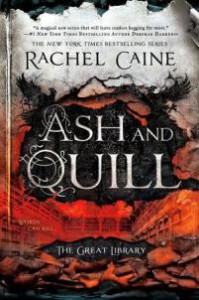 Hoarding all the knowledge of the world, the Great Library jealously guards its secrets. But now a group of rebels poses a dangerous threat to its tyranny…

Jess Brightwell and his band of exiles have fled London, only to find themselves imprisoned in Philadelphia, a city led by those who would rather burn books than submit. But Jess and his friends have a bargaining chip: the knowledge to build a machine that will break the Library’s rule.

Their time is running out. To survive, they’ll have to choose to live or die as one, to take the fight to their enemies—and to save the very soul of the Great Library…

Rachel Caine has certainly got my number with this series.  Book three is right up there with book one, making me long for the next book.  The Library of Alexandria is still dark, controlling, and overbearing.  Our cast of characters is still fleeing their clutches, but wishing that they could change the Library, take it back to what it was supposed to be—a beacon for humanity.

Jess Brightwell comes into his own in this installment.  Dario pushes him to think about what he wants to change and to be realistic about what will happen.  It seems to open a whole new Jess, one who can be as Machiavellian as his father, as devious as those in charge of the Library, as ruthless as the Iron Tower.

Trapped in a city of Book Burners, our fearless band of library scholars must somehow survive and outwit those who run this blockaded city of Philadelphia.  Never has there been less brotherly love in that city.

And that ending!!!  Ms. Caine, you have guaranteed that I will be impatiently awaiting Book 4.