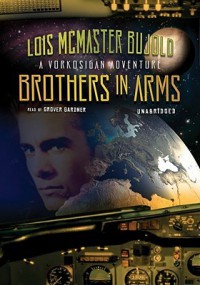 If his enemies would just leave him alone, Miles Vorkosigan (alias Admiral Naismith) decided bitterly, the Dendarii Free Mercenary Fleet would collapse all on its own. But his enemies were plotting a more deadly fall.

For some unexplained reason the Dendarii payroll is missing and the orders from the Barrayaran Imperial Command are being delayed by Miles's superior, Captain Galeni. What connects the impeccable insufferable Captain Galeni and the Komarran rebel expatriates on Earth anyway? But the most deadly question of all before Miles is more personal: are Miles's two identities, Admiral Naismith of the Dendarii and Lieutenant Lord Vorkosigan of Barrayar, splitting apart along the lines of his divided loyalties? And who is trying to assassinate which version of him?

As per usual, Miles Vorkosigan creates a stir wherever he goes. After figuratively hitting a wasp nest with a stick and annoying the Cetagandians, he hares off to old Earth to get his crew healthy and his ships fixed. Of course, things go horribly awry and lots of intrigue & adventure follows.

Somehow, for me, even though there are lots of action sequences, these books are more about the relationships. He has to balance his two identities as Lord Vorkosigan and Admiral Naismith, each with their own responsibilities. He has his cousin Ivan to consider, as Ivan is also stationed on Earth. Plus Miles makes friendships & alliances wherever he goes—and they complicate an already intricate life. Finally there’s the question of whether he will ever get a personal life and find someone to love him as Miles, regardless of which identity he’s currently living in.

Plenty of adventure here for those who like such things, and lots of character development for me. Another successful installment in the saga of Miles Vorkosigan.

Book 261 in my Science Fiction and Fantasy Reading Project.