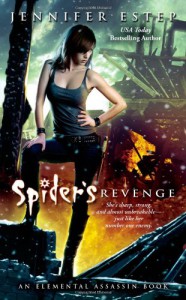 Old habits die hard. And I plan on mur­der­ing some­one before the night is through.

Killing used to be my reg­u­lar gig, after all. Gin Blanco, aka the Spi­der, assassin-for-hire. And I was very good at it. Now, I’m ready to make the one hit that truly mat­ters: Mab Mon­roe, the dan­ger­ous Fire ele­men­tal who mur­dered my fam­ily when I was thir­teen.

Oh, I don’t think the mis­sion will be easy, but turns out it’s a bit more prob­lem­atic than expected. The bitch knows I’m com­ing for her. So now I’m up against the army of lethal bounty hunters she hired to track me down. She also put a price on my baby sister’s head. Keep­ing Bria safe is my first pri­or­ity. Tak­ing Mab out is a close sec­ond.

Good thing I’ve got my pow­er­ful Stone and Ice magic — and my irre­sistible lover Owen Grayson — to watch my back. This bat­tle has been years in the mak­ing, and there’s a chance I won’t sur­vive. But if I’m going down, then Mab’s com­ing with me...no mat­ter what I have to do to make that happen.

I’m glad this installment actually made some plot progress. The revenge plot actually went somewhere finally in this 5th (!) installment. And the romantic sub-plot seems to have firmed up nicely as well. I like the magic system, I’ve grown accustomed to the environs of Ashland, I like the secondary characters.

I’m so tired of hearing about Gin being an assassin (retired or otherwise), where she keeps her knives (seriously, if you’ve made it this far in the series, you have read that hundreds of times), how Mab Munroe hurt her, what the inside of the Pork Pit looks like, what everybody’s various runes look like, or about Finn & his chicory coffee, just like dear old dad. The obsession with eye colour is also a bit tiring. Does it really matter?

I liked that Gin actually made some realistic mistakes, early in the novel, and has to deal with the fallout. I also appreciated that we finally got some back-story on the Devereau sisters and we now know why they help Gin. I’m a little less gung-ho about Finn & Bria’s new attraction to each other.

The big negative that I can see ahead? There’s going to be no end of the repetition reminding us of what went down with Mab. This will last for at least 4 more books by my reckoning, if not more.  Sigh! I like Gin, I like her friends, I like the setting. This could be such an awesome series if an editor was willing to be ruthless.