The Curse of the Kings / Victoria Holt 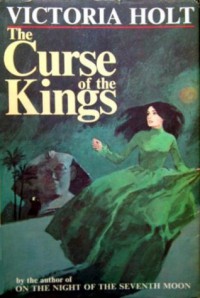 For centuries the tombs of the Pharaohs were haunted by a deadly curse. And when two eminent archaeologists have died mysteriously, Judith Osmond was certain that it was the curse at work. Then, overnight, her life changed.

There was an unexpected inheritance. Then Tybalt, a young archaeologist and the man she adored, asked her to marry him. But Tybalt planned a honeymoon amid the tombs of the Pharaohs, and suddenly it looked as if the curse of the kings had come to haunt Judith . . .

I really enjoyed Victoria Holt’s books when I was in my teens. Re-reading them as a mature adult has been a bit disappointing. Having always had a bit of thing for Ancient Egypt, I recall being enchanted by The Curse of the Kings. Unfortunately, having just recently read The Lord of the Far Island, I can now see far too clearly how formulaic Holt’s romances were.

The main character is an orphan, she gets her education as a fortunate extra with the children of the gentry, she’s beautiful & spirited, and she gets miraculously saved from a desperate life as a lady’s companion by snagging the man intended for the well-born gal. Still, there is a slightly older, beautiful woman who seems like she might be competition for the husband’s interest and there are mysterious goings-on.

I think my main beef with this book is Judith’s education. The reader is told repeatedly how she has read ever so many books on archaeology and Ancient Egypt, and yet there is her new husband explaining tomb paintings to her, pointing out Anubis and Amun, as if she has never seen a book before and she acting like it’s all brand new!

And I had never realized before how undemonstrative Tybalt is! I associate the name Tybalt with fiery passion, so it seems strange to have this cold man share the name.

Perhaps I should have let sleeping dogs lie, but I have another of Holt’s books out of the public library, which I will likely read.