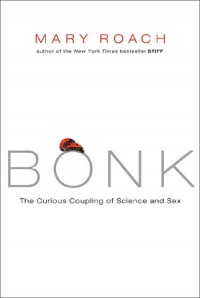 The study of sexual physiology - what happens, and why, and how to make it happen better - has been a paying career or a diverting sideline for scientists as far-ranging as Leonardo da Vinci and James Watson. The research has taken place behind the closed doors of laboratories, brothels, MRI centers, pig farms, sex-toy R&D labs, and Alfred Kinsey's attic.

Mary Roach, "the funniest science writer in the country" (Burkhard Bilger of 'The New Yorker'), devoted the past two years to stepping behind those doors. Can a person think herself to orgasm? Can a dead man get an erection? Is vaginal orgasm a myth? Why doesn't Viagra help women or, for that matter, pandas?

In 'Bonk', Roach shows us how and why sexual arousal and orgasm, two of the most complex, delightful, and amazing scientific phenomena on earth, can be so hard to achieve and what science is doing to slowly make the bedroom a more satisfying place.

Mary Roach, as usual, is drawn to the weird and the wonderful. I love her sense of humour about whatever her current obsession happens to be. A book about sex research could be dry and boring, but not with Ms. Roach at the helm.

Male readers may cringe at several of the chapters regarding surgery on the family jewels—it made me a little queasy. I am also amazed that she managed to drag her husband along to participate in research projects with her. He is obviously a guy with a sense of adventure!

Sex researchers, both animal and human, were good sports to show off their work in progress or discuss published results. As stated a couple of time in the book, publicity can sometimes be a hindrance to obtaining research money, so they were either very established researchers or willing to risk the exposure.

We’re all interested in the topic, but few of us have the time or inclination to track down these great stories! Thank you, Mary Roach, for being the obsessive researcher for us.