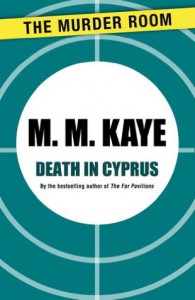 Twenty-year-old Amanda Derrington is on an extended cruise with her uncle when she decides to make a short side trip to the sun-washed island of Cyprus. But even before the ship arrives in port, there is a suspicious death. Once the passengers reach the island, it soon becomes clear that the death was in fact an act of murder. What Amanda had meant to be a pleasant excursion quickly takes a turn for the worse in this classic novel of suspense and romance by one of our most celebrated writers.

I love these older murder mystery/romance mash-ups written by writers like M.M. Kaye and Mary Stewart. Dating from the 1950s, they were written in an era where book heroines were more innocent (and worried about their reputations) and the social classes were more firmly entrenched.
I owned all the Kaye’s Death in … series at one point in my life and read them all multiple times. I wasn’t more than three pages into this one when I realized that I already knew who the murderer was, but I still enjoyed the reading process. The descriptions of Cyprus were beautiful and made me wish I could visit Villa Oleander and picnic in the Cyprean countryside. Kaye spent time in Cyprus as a British army wife, so no doubt was able to describe terrain that she was familiar with and obviously fond of.

Reading this now, as an older person, I realize how excruciating the effects of class are and how much personal income has become the new way to distinguish between classes (rather than whom one is related to). The characters in this novel often marry for money (George Norman and Alastair Blaine both depend on their wives’ money for their comfortable life style) and it was a foregone conclusion by their friends that it was a reasonable choice. Interestingly, it was men marrying for financial advantage, rather than the usual women in this case, perhaps Kaye pointing out that it’s a two way street.

This time around I also noticed how Persis, the American writer, is so very stereotypically American—she is loud, brash, demanding, and not the slightest bit retiring. Plus, she is attracted to British men for the same reason that many North American women are, that enticing accent. Still, she is a good friend to Amanda, our heroine, and courageous when required, so the impression is not at all negative.

An excellent nostalgia read, a great way to spend a lazy summer evening.