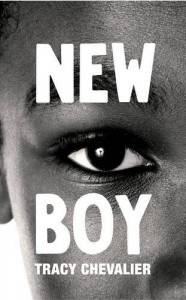 Arriving at his fourth school in six years, diplomat’s son Osei Kokote—“O” for short—knows he needs an ally if he is to survive his first day, so he is lucky to hit it off with Dee, the most popular girl in school. But one boy, used to holding sway in the world of the school­yard, can’t stand to witness the budding relationship. When Ian decides to destroy the friendship between the black boy and the golden girl, the school and its key players—teachers and pupils alike—will never be the same again.

The tragedy of Othello is vividly transposed to a 1970s suburban Washington school, where kids fall in and out of love with each other before lunchtime, and practice a casual racism picked up from their parents and teachers. The world of preadolescents is as passionate and intense, if not more so, as that of adults. Drawing us into the lives and emotions of four eleven-year-olds—Osei, Dee, Ian and his reluctant girlfriend Mimi—Tracy Chevalier’s powerful drama of friends torn apart by love and jealousy, bullying and betrayal, is as moving as it is enthralling. It is an unfor­gettable novel.

What is Othello about? Love, jealousy, betrayal, revenge, repentance. This retelling of Shakespeare’s tragedy is intense. The action is condensed into one day on the school grounds. Osei is the new boy—introduced to this grade six class shortly before school ends for the summer. Son of a Ghanaian diplomat, O is used to being the new kid and to being the only black child in the schools he goes to.

Ian is every bit as calculating and cold as any Iago. He is sociopathic in this rendition—shaking down the other kids for their lunch money, turning games into gambling matches, using and abusing those around him. Dee is well-intentioned but easily manipulated by a malicious Ian, as is her best friend, Mimi.

This is an emotional stage in life, as kids go through puberty, start to obsess about relationships, figure out what tasks they are good at, and generally learn to steer their way through the obstacles of life. I was surprised that Chevalier chose this age group to tell this story, but for me it worked well.

It was a quick read and although I knew the broad strokes of the Othello story, I was pleasantly surprised by the details, the characters, and the inevitable ending.