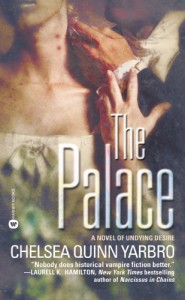 Renaissance Florence 1490-1498. They say his palazzo is to be a magnificent work of art-a dazzling edifice to rival the most opulent in the city. Its owner is a stranger to Florence, a wealthy foreigner who dresses in black silk and practices the age-old secrets of alchemy. But the man who calls himself Francesco Ragoczy da San Germano conceals his own dark secrets that have exiled him to a life of blood-filled torment and eternal wandering. Yet in the sensation-craving Estasia, cousin to Botticelli, San Germano has found a woman whose unquenchable passions could exceed his own. And in the fanatical monk Savonarola, he has found a powerful enemy: a dangerously obsessed ascetic who exerts a hypnotic power over the citizens of Florence. Savonarola is embarked on a reign of terror that will not end until every thing of beauty is destroyed and every heretic burned at the stake. As the city becomes a hotbed of religious fervor and escalating violence, San Germano is faced with an impossible choice that could doom those he loves forever...and transform his own existence beyond recognition.

CQY writes excellent historical fantasy. I appreciate the amount of research that she obviously put in to get Renaissance Florence just right. I don’t know enough Italian to know if that language was being used appropriately, but it sounded good to my untutored ear.

I like her main character, Saint-Germain, but sometimes I think he is not quite “vampirey” enough, if you know what I mean. He is altogether too nice and thoughtful and gentle—rarely does he use his vampire strength or powers of persuasion. Although the books’ covers display ladies’ necks with puncture wounds, the reader really doesn’t see very much to that effect in the novel. There seem to be more problems with being a vampire and fewer impressive powers.

I’m also intrigued with Yarbro’s version of the vampire, where the combination of blood & sex is better than just blood. Apparently Saint-Germain is limited to lips & hands to stimulate his partner (not such a bad thing from a female perspective). However, it would get boring in the long-term, as it does for Estasia in this adventure, leading her to threaten Saint-Germain with exposure and becoming a tricky adversary for him to deal with. This was where I figured he should just drain her and eliminate a problem, and his reluctance to do so made no sense to me. Plus, there is a scene where Saint-Germain visits his alchemical apprentice in prison—the sexual dimension of their meeting when his assistant had just been tortured just felt icky. I know they needed to do a blood exchange if she was to escape, but as I say, the sexuality felt inappropriate to me during that scene.

The recurring theme seems to be loneliness—Olivia writes frequent letters asking Saint-Germain to come to Rome, which for some inexplicable reason he is unwilling to do. S-G seems to be frequently creating new vampires, who then get upset about their situation (despite the fact that they asked for the transformation) and they head out on their own.

Obviously, an eternal vampire gives an author the excuse to research & write about whatever historical setting they are interested in. While the historical angle is great, I wish the vampiric nature of the main character was more apparent.