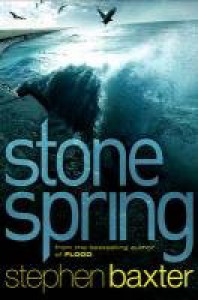 Ten thousand years ago, a vast and fertile plain exists linking the British Isles to Europe. Home to a tribe of simple hunter-gatherers, Northland teems with nature's bounty, but is also subject to its whims.

Fourteen-year-old Ana calls Northland home, but her world is changing. The air is warming, the ice is melting, and the seas are rising. Then Ana meets a traveler from a far-distant city called Jericho-a city that is protected by a wall. And she starts to imagine the impossible...

I read this book for the frivolous reason that it has “Spring” in the title and its springtime as I write this review. Plus, it had been on my TBR list for some time and I decided that it was time that I moved it.

It’s a solid story—set in Mesolithic Europe, as the climate and the land masses change with the melting of the ice sheets. Baxter has obviously done his research on the archaeology of the region, including the parts that are completely underwater now. And he has thrown in his own imaginative touches, creating believable cultures for these prehistoric tribes and inventing one that is entirely fictional, the “Leafy Boys.”

There is conflict—when you’ve got a hammer, every problem looks like a nail and when you’ve got a stone-tipped spear, well everything looks like it needs to be poked with that spear. The primary relationships are those of tribe, parent, child, etc. and not so much romantic. There is very, very little sex described, it is mostly implied or spoken about crudely by loud-mouthed men. In some ways, it is Jean Auel’s Earth’s Children series without the sex and much less emotional angst.

Obvious messages include: slavery is bad, global warming will raise water levels so deal with it, and that it’s difficult to deal with people who hold extremely different worldviews from yourself. I was somewhat unsure of how I felt about the character of Ana, who runs other tribe’s people’s lives ruthlessly and has a baby only to solidify her chosen power structure. I know people like this exist, but her choice of power over genuine emotion bothered me.

I guess what I didn’t entirely care for was the grafting of 21st century values and motivations onto Stone Age people. It didn’t always ring true for me, but it was still a pretty good book.