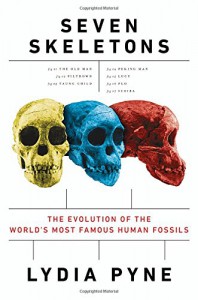 An interesting exploration of the reasons that certain paleo-human fossils achieve the status of icons in popular culture. What makes a fossil catch the interest of everyday people? Firsts are always attention grabbing, as are remains which include skulls or very complete skeletons. A good nickname or discover story helps too (see Lucy, Australopithecus afarensis). And you can’t beat good old-fashioned controversy either!

When controversy is one of the requirements, it becomes obvious why the author chose Piltdown Man, the English fake, as one of her iconic fossils! Talk about controversial—and people continue to speculate today about who all was in on the hoax and who got fooled. Humans are attracted to good stories, especially mysteries, so I guess Piltdown deserves this position.

Also interesting was the choice of Peking Man, where the actual fossils were lost in the swirling turmoil of WW2 in China. Only casts of the major fossils remain, but once again there is a very noir mystery surrounding the fate of the real McCoy. The mystery is like catnip to puzzle-solving people and the search for the original fossils continues.

I was most interested in the final two chapters, concerning the Flores Island “Hobbit” and Australopithecus sediba. The first I was only familiar with through the original news announcements and the second was unknown to me. I’m not sure that we could label either of them “iconic” just yet, but there is certainly potential.

Interestingly absent were any of the Leakey family’s discoveries, as was any discussion of the personal rivalries between Richard Leakey and Donald Johanson (Lucy’s discoverer). Hearteningly present was the open attitude of the paleoanthropologists who are sharing their data on Australopithecus sediba—instead of hoarding the fossil and the data, they are opening the doors to any researcher with an interest and showing a new, inclusive way of doing paleoanthropological research which gives me great hope for the future.