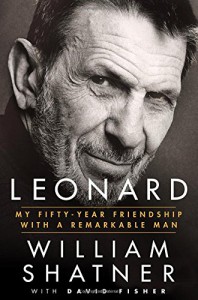 Leonard Nimoy and William Shatner first crossed paths as actors on the set of The Man from U.N.C.L.E. Little did they know that their next roles, in a new science-fiction television series, would shape their lives in ways no one could have anticipated. In seventy-nine television episodes and six feature films, they grew to know each other more than most friends could ever imagine.

Over the course of half a century, Shatner and Nimoy saw each other through personal and professional highs and lows. In this powerfully emotional book, Shatner tells the story of a man who was his friend for five decades, recounting anecdotes and untold stories of their lives on and off set, as well as gathering stories from others who knew Nimoy well, to present a full picture of a rich life.

I am a dyed-in-the-wool Star Trek fan—I started watching the original series while in my tweens. It was “must see” after school TV (even though the show was cancelled by this point & I was watching re-runs). Mr. Spock was my absolute favourite character and I was happy to see him popping up in later incarnations of Star Trek, especially the new series of movies. So I was saddened by Leonard Nimoy’s death in 2015. I appreciate that he did many other roles, by it is Spock that I will remember him for.

In January, I was able to see his son’s documentary For the Love of Spock while flying to Johannesburg. I enjoyed seeing Nimoy & Spock from his son’s perspective, even the difficult parts of that relationship. Naturally, when I got home, it seemed appropriate to read William Shatner’s memoir concerning Leonard Nimoy as well.

I was pleasantly surprised at how honest Shatner seemed to be in this memoir. I think that it takes courage to admit that you don’t have many friends, that you don’t know how to make or maintain friendships, and that you screw up friendships & don’t know why. His co-writer, David Fisher, lets Shatner’s voice shine through and I felt some empathy for a man who may have career success, but seems like a lonely old guy.

Mind you, this book is replete with Shatner’s two favourite words, “I” and “me.” While nominally about Leonard, the memoir reveals far more about Shatner than it does about Nimoy. Shatner can’t be an easy man to befriend—he doesn’t seem to fully understand concepts like teasing, for example. He tries to participate, but more like a person following a ritual than like someone who truly understands what’s going on and as a result, he often misses the mark.

Although his egoism is obvious, I couldn’t help feeling sorry for Shatner at the book’s end, when it seems that he and Nimoy were estranged. Shatner quite honestly couldn’t understand why and seemed honestly distressed by the situation. Despite their rift, he has written an honest and moving account of their 50 year association and has tried to give a fair portrayal of their relationship.

If you too are a Star Trek devotee, you will probably enjoy this memoir. Others may not find it quite as interesting.