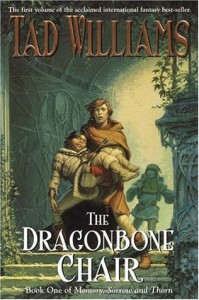 A war fueled by the powers of dark sorcery is about to engulf the peaceful land of Osten Ard—for Prester John, the High King, lies dying. And with his death, the Storm King, the undead ruler of the elf-like Sithi, seizes the chance to regain his lost realm through a pact with the newly ascended king. Knowing the consequences of this bargain, the king’s younger brother joins with a small, scattered group of scholars, the League of the Scroll, to confront the true danger threatening Osten Ard.

Simon, a kitchen boy from the royal castle unknowingly apprenticed to a member of this League, will be sent on a quest that offers the only hope of salvation, a deadly riddle concerning long-lost swords of power. Compelled by fate and perilous magics, he must leave the only home he’s ever known and face enemies more terrifying than Osten Ard has ever seen, even as the land itself begins to die.

Oh, the orphan boy with unknown talents, who under-performs until the pressure is applied—how many fantasy stories have you read with this structure? Let’s see--Magic’s Pawn by Mercedes Lackey, The Riftwar Saga by Raymond Feist, The Belgariad by David Eddings, The Sword of Shannara by Terry Brooks, even to some extent The Hobbit and The Lord of the Rings by Tolkien (substitute “hobbit” for “boy”). Maybe even the King Arthur story to some extent—until young Arthur pulls the sword from the stone. It’s a well-used idea.

At the book’s beginning, I found Simon particularly annoying. As lives go in Midieval-like settings, his lot in life isn’t so bad, although the housekeeper Rachel does make his existence somewhat miserable. However, we all have to earn our keep, so pull up your socks, laddie, and make an effort! Even when offered opportunities to learn to read and to study, he complains! Typical 14-year-old, I guess, something I wouldn’t know about, having had the reading bug ever since I learned to read. Simon doesn’t appreciate his warm bed, three square meals a day, and secure surroundings until he has to flee the castle.

Once he starts running for his life, Simon begins growing up. He becomes a much more likeable character at that point and I began to get invested in his tale. He loses some of the ADHD qualities that made him a “mooncalf” in the beginning and becomes a much more focused young man.
I also appreciated a brand new take on trolls—making them smaller, wiser, and wilier. I liked Binobik and his wolf companion a lot. The Sithi are interesting in their ambiguity—are they enlightened, ethereal beings like the elves in Tolkien? Or are they the dark enemies of mankind? The world of Osten Ard is very detailed and easy to picture in the mind’s eye.

The writing isn’t the best ever, but the story is engaging and I am waiting impatiently for volume 2 at my public library, where it is ‘on order.’ No telling how long I will have to pause before I know what happens to Simon, the kingdom, and the Storm King!