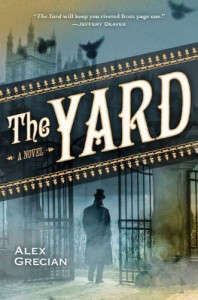 Victorian London is a cesspool of crime, and Scotland Yard has only twelve detectives—known as “The Murder Squad”—to investigate countless murders every month. Created after the Metropolitan Police’s spectacular failure to capture Jack the Ripper, The Murder Squad suffers rampant public contempt. They have failed their citizens. But no one can anticipate the brutal murder of one of their own . . . one of the twelve . . .When Walter Day, the squad’s newest hire, is assigned the case of the murdered detective, he finds a strange ally in the Yard’s first forensic pathologist, Dr. Bernard Kingsley. Together they track the killer, who clearly is not finished with The Murder Squad . . . but why?

I liked The Yard. I really wanted to love it, but a couple of things stood in my way. I really felt like it was a modern forensic mystery being forced into a Victorian corset—and details were frequently straining to escape.

A little research has helped me like it more. This really was the time period during which fingerprinting became a thing that police forces did and autopsies were practiced. I found the resistance of some members of the police force to these procedures to be believable—perhaps more believable than the easy acceptance of them by the main characters.

I probably would have been more enamoured by this novel had I not been reading some of Ben Aaronovitch’s excellent Rivers of London series recently. Aaronovitch, as a Londoner, has such an advantage with the dialog—his sounds authentic, he uses slang expertly, his dialog sounds natural. This is a difficult task for a North American author to duplicate. Grecian’s characters inevitably end up sounding somewhat American. A couple of references to the modern myth of families needing "closure" especially rubbed me the wrong way, particularly since I really don't believe that there's any such thing! Having lost family traumatically in a car accident, I can tell you that there is never closure, just the careful construction of a new reality.

I didn’t get a strong sense of place in The Yard either. London is such a wonderful, rich location for a story--Rivers of London or the Slough House series by Mick Herron make the city an integral part of the action.

Still, this was an interesting first book in the series and I wouldn’t be surprised if I read at least the second book at some point to see if the author finds his footing. There are a number of interesting people who seem poised to become regulars and the possibilities are intriguing. If you enjoyed this book, I would also recommend Dust and Shadow: An Account of the Ripper Killings by Dr. John H. Watson by Lyndsay Faye, a book which I feel captures the flavor of the period a little better.