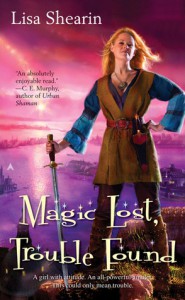 A girl with attitude. An all-powerful amulet.  This could only mean trouble.

My name is Raine Benares. I’m a seeker. The people who hire me are usually happy when I find things. But some things are better left unfound…

Raine is a sorceress of moderate powers, from an extended family of smugglers and thieves. With a mix of street smarts and magic spells, she can usually take care of herself. But when her friend Quentin, a not-quite-reformed thief, steals an amulet from the home of a powerful necromancer, Raine finds herself wrapped up in more trouble than she cares for. She likes attention as much as the next girl, but having an army of militant goblins hunting her down is not her idea of a good time. The amulet they’re after holds limitless power, derived from an ancient, soul-stealing stone. And when Raine takes possession of the item, it takes possession of her.

Now her moderate powers are increasing beyond anything she could imagine—but is the resumé enhancement worth her soul?

A charming introduction to a series that is new for me and which I will definitely read to the end. I love Lisa Shearin’s SPI Files and picked up the first three books of this series when I found them in my favourite used book store. A good impulse, that.

While not without its flaws, I found this to be an excellent distraction from the boredom of sitting most of a day in an airport in Santiago, Chile. One flight got in at mid-day and the next didn’t leave until after 10 p.m. Distraction was definitely necessary!

If you like your elves regal and beyond reproach, set this book aside immediately. Raine Benares isn’t that kind of elf. She is the white sheep of a family of pirates, trying to make a living as a Seeker (someone who finds lost objects or people). Fierce, loyal, brave, and funny, Raine is a woman I’d love to have as a friend. And that is one of my only criticisms of the book—Raine needs some female friends to make her a bit more real. All the male characters are just fine and treat her pretty well, but a girl needs someone to really confide in, someone to bitch to, and someone to have her back when things don’t work out.

Also, be warned that there is some romance involved—certainly the book doesn’t qualify as a paranormal romance, but if romantic attraction gives you the hives, walk away immediately. The romantic elements don’t bury the plot, but they are significant. There are also signs of a love triangle to come, so those who hate the trope would do well to stay away. However, it is well set up: Raine (herself conflicted over the whole good/bad dichotomy) is attracted to both a goblin bad boy (Tamnais) and to a white-knight elf (Mychael).

Although a lot takes place and we learn a lot about the world that Raine lives in, not much time passes in this novel and not much progress on the plot line takes place (much the same as SPI Files, honestly). But I found that I could cheerfully put up with that because of the delightfulness of the world and the fun that I was having along the way.

Ms. Shearin’s sense of humour appeals to me strongly, so I enjoyed this adventure a lot. Also appreciated, the cover depicts Raine fully clothed and of a normal figure (i.e. not some scantily clad, wasp-waisted, busty comic book character).