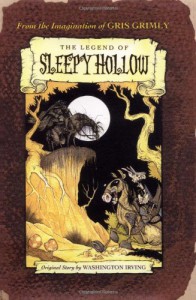 Are all the lights on?  Is there a parent in the house?  Are the windows shut and locked? Double-check!  They HAVE to be if you are going to read this book, which is undoubtedly the scariest rendition of one of the greatest ghost stories ever told: The Legend of Sleepy Hollow.  While you may have heard of Ichabod Crane, Katrina Van Tassel, and the Headless Horseman, you've never SEEN them quite like this -- through the macabre imagination of the inimitable Gris Grimly.  So, take a deep breath and take a long look. And you may want to bring a flashlight to bed with you tonight....

I have come to realize over the last several months that I owned an impressive stack of comic books as a child, and that they were a very eclectic mix of super heroes, fairy tales, and Classics Illustrated. I’m reasonably comfortable in asserting that it was from one of these comics that I originally became acquainted with Sleepy Hollow and the Headless Horseman.

So for the Pumpkin square on my Hallowe’en Bingo card, I decided to read Washington Irving’s ghostly tale. Imagine my surprise to find it nearly impossible to find the unaltered original story in either my public library or university library!  They were all either illustrated children’s versions (one of which I ended up with), simple versions for ESL students, or scripts for plays.  Both libraries had copies of the original at one time or another, but they have all gone missing.  I’m starting to feel like there was a ghostly conspiracy to keep the original story out of my hands!

As it turns out, I thoroughly enjoyed the illustrations of Gris Grimly. His horses were especially delightful.  Ichabod Crane was as gangly and long-nosed as you could imagine and Brom Bones was the bulky bully that I expected.  Katrina Van Tassel was a trifle disappointing to me, not really inhabiting much space in the artwork—I’d be interested to read the original to see how much stage-time she received in it.

A charming story, well illustrated. Someday, I will get my hands on the real deal and be able to contrast and compare.