A Pitying of Doves / Steve Burrows 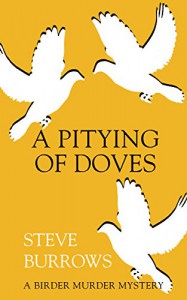 With murder, everyone pays a price ... Why would a killer ignore expensive jewellery and take a pair of turtledoves as the only bounty? This is only one of the questions that piques Chief Inspector Domenic Jejeune s interest after a senior attache with the Mexican Consulate is found murdered alongside the director of a local bird sanctuary. The fact that the director s death has opened up a full-time research position studying birds hasn t eluded Jejeune either. Could this be the escape from policing that the celebrated detective has been seeking? Even if it is, Jejeune knows he owes it to the victims to solve the case first. But a trail that weaves from embittered aviary owners to suspicious bird sculptors only seems to be leading him farther from the truth. Meanwhile, Jejeune is discovering that diplomatic co-operation and diplomatic pressure go hand in hand. With two careers hanging in the balance, the stakes have never been higher for Inspector Jejeune. And this time, even bringing a killer to justice may not provide the closure he s looking for.

Second book in the birder murder mystery series and I have enjoyed both of them a great deal.  This second installment feels more solid, now that the stage is set and the main characters have been introduced.  I like the main character, Domenic Jejeune, despite the fact that he is difficult to get to know, maybe even because he is elusive.

This is another muddy mystery, quite literally as a van has to be hauled out of a marsh.  The landscape of Norfolk is very much a character in these books and I’m glad that I have visited there and can picture some of the locations quite clearly.  (This could also be an excuse to go back, of course, and reacquaint myself with this lovely birdy part of the world, for as Jejeune notes, birders do like to retrace their steps).  Of course the case hinges on the doves of the title—but in an intelligent way, not just a kitschy way.  Burrows delves into real conservation issues to provide the clues for his detective.  I was fooled for a little while, thinking thoughts about Passenger Pigeons and cloning, a red

herring which I am pretty sure Burrows intended.  If he didn’t, it worked anyway!

I don’t think there’s a birder out there who hasn’t wondered at some point whether s/he could turn the hobby into a source of income.  We all flirt with the idea of how wonderful it would be to escape our current employment treadmill to spend every day in the field.  Jejeune may be a fabulous detective who can’t shut his mind off just because his superior asks him to, but he longs for a change in vocation.  Obviously, since there is a third book, he hasn’t found an escape just yet!  That is also typical—field work doesn’t pay very well and being a tour leader has its own kind of drudgery.

Secondary characters are asserting themselves a bit more this time around, and Jejeune’s relationship with Lindy assumes greater importance.  Is she going to be able to stick with this quiet, obsessed man for the long haul?  (Any of us who have dated birder men frequently ask ourselves the same question).

A solid second book, recommended for those who enjoy both mysteries and birding.