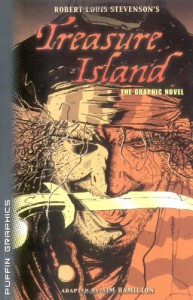 A treasure map where X marks the spot, a schooner set to sail, a onelegged seaman with a parrot on his shoulder, a boy whose bravery will be tested by murder, mutiny, and betrayal — Robert Louis Stevenson’s well-loved tale is the ultimate swashbuckling adventure. Sweeping a path from the sleepy English coast to the raging high seas to a tropical island concealing a buried treasure, this story of friendship and greed, loyalty and courage stars an unforgettable cast of characters: young Jim Hawkins, the terrifying Blind Pew, the wild man Ben Gunn, and one of literature’s most dastardly villains, the charming, crafty, and utterly unscrupulous Long John Silver.

Shiver me timbers! I wonder what Robert Louis Stevenson would think of Captain Jack Sparrow? Because a lot of Jack Sparrow’s DNA can be found in Treasure Island. I choose to think that Stevenson would be delighted by how influential his book had been.

This is a book that I never was interested in as a kid—pirates just didn’t appeal to me, I guess. But I was missing a pretty good yarn and I’m glad I was finally inspired to read it as an adult. The assumptions of class were really brought home to me during the reading—the upper classes expect to be obeyed and are right royally ticked off when their subordinates aren’t cooperative with that assumption. The pirates are portrayed as completely controlled by their baser desires (although no sex was allowed!) and this makes them vulnerable to defeat by the more self-controlled gentlemen. Despite that, I was left feeling rather sympathetic to Long John Silver, despite his weasel ways.

I think a re-watch of Pirates of the Caribbean is in order now!