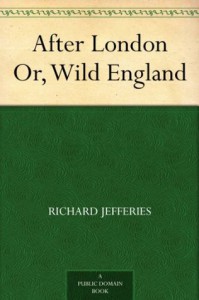 Jefferies’ novel can be seen as an early example of post-apocalyptic fiction. After some sudden and unspecified catastrophe has depopulated England, the countryside reverts to nature, and the few survivors to a quasi-medieval way of life.

The first part, The Relapse into Barbarism, is the account by some later historian of the fall of civilisation and its consequences, with a loving description of nature reclaiming England. The second part, Wild England, is an adventure set many years later in the wild landscape and society.

The book is not without its flaws but is redeemed by the quality of the writing, particularly the unnervingly prophetic descriptions of the post-apocalyptic city and countryside.

First book read after my first cataract surgery and if I hadn’t been trapped at home, I’m not sure I would have finished it. The first whole section is primarily an info dump—how the U.K. has changed since some rather nebulous apocalypse (or maybe it was nebulous to me because I was struggling to read with one eye, a harder task that I anticipated).

I don’t require that the main character be likeable—I’ll take a curmudgeon any day as protagonist, but this young man was pretty clueless and it’s a wonder that he survived the book. And that despite the fact that very little happens. Then, at the end, when things begin to happen, the author yanks him out of the plot again, and sends him off on a mission that seemed to me to be quite hopeless. The end.

I am very unsure how this novel ended up on the Guardian’s list of 1000 novels that everyone should read. I could only recommend it as an example of many things that should not be done in a post-apocalyptic novel. Read The Earth Abides or Alas, Bablyon instead and leave this one in the library. Certainly save your money and do not buy it.