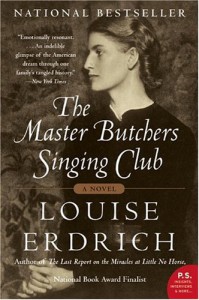 Having survived World War I, Fidelis Waldvogel returns to his quiet German village and marries the pregnant widow of his best friend, killed in action. With a suitcase full of sausages and a master butcher's precious knife set, Fidelis sets out for America. In Argus, North Dakota, he builds a business, a home for his family—which includes Eva and four sons—and a singing club consisting of the best voices in town. When the Old World meets the New—in the person of Delphine Watzka—the great adventure of Fidelis's life begins. Delphine meets Eva and is enchanted. She meets Fidelis, and the ground trembles. These momentous encounters will determine the course of Delphine's life, and the trajectory of this brilliant novel.

When I first started reading The Master Butchers Singing Club, my initial response was “Not another war book!” as I am not a fan of war fiction.  Both World Wars do feature in the book, but they do not overpower the story, for which I am very thankful.

I don’t think that I have ever before consciously encountered a book set in the period between the two World Wars and that is odd—it’s a very rich period of history to explore.  The author’s style reminded me strongly of Canadian author Robertson Davies (a complement coming from me, as I adore his Deptford series, which also deals with small town characters).  Her characters are very unique and yet they are ordinary people, living ordinary lives in many ways.  Alcoholics, orphans, poor people, butchers, singers, Native people, circus people, murderers, children, all making their way through the world as best they can.  Erdrich doesn’t make them flamboyantly odd, just the regular peculiar that one finds in small communities.  It strikes me that this could have been a Canadian book—the northern U.S. shares many environmental and cultural threads with Canada, I think.

This is probably also the best depiction of a love triangle that I have ever encountered in literature.  Several triangle relationships hinge on Fidelis, the master butcher.  His wife Eva and her friend Delphine.  His sister Tante and Delphine.  Fidelis, Delphine and Cyprian.  And yet, as his name would indicate, Fidelis is faithful to each of the women in his life.

He is the provider for Eva until her death, considers Tante until she returns to Germany, and waits until he is sure that Cyprian is truly gone before proposing to Delphine.

Another pseudo-Canadian theme in the novel is that of identity, a well-worn Canuck obsession.  We get to watch Delphine struggle with her lack of knowledge about her origins, and see each of Fidelis’ sons forge lives for themselves and decide where their hearts lie.

So many underlying themes, well written, and thought provoking.