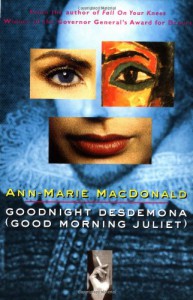 I attended a performance of this play last night and thoroughly enjoyed it. It was a joint presentation of Handsome Alice (a feminist theatre troop) and The Shakespeare Company here in Calgary.  There was a large contingent of high school students in the audience, and judging from their response, it was entertaining for them too.

I’m not a laugh-out-loud-in-the-theatre type of person, but these performers gave me no choice. Laughing had to happen.  And yet there was a serious side to the play as well, as we watch a young doctoral student realize that she has been used by a professor and that her lack of self-confidence is holding her back.  How many young women (and maybe some not so young women) are there out there who believe that they are not quite enough?  Feeling that they have to justify their existence by “helping” other people, to their own detriment?  Being used by the people out there who can recognize their neediness?  You know, those people who actually have to be reminded on airplanes to put on their own oxygen mask first, before helping others.

In this version of events, Constance (our student) watches her professor take credit for her work, get engaged to one of his other students, and take up a university position that she had hoped to claim for herself. In despair, she is transported into <i>Othello</i>, where she changes the balance of things to prevent Desdemona’s death and learns that Desdemona isn’t nearly as passive as the Bard’s play portrays her!  Subsequent adventures among the Montagues and Capulets in Verona reveal a teenage Juliet who is obsessed more by death than by love.  Between Desdemona and Juliet, Constance learns to take her life in her own hands and quit relying on the men in her life to give her meaning.

Getting all these modern messages presented in blank verse is no mean feat. I admired how well the author had to know the plays, academia, and female psychology.  This is a play worth watching, especially if you have a teenage girl in your life who is likely to enter the university world.