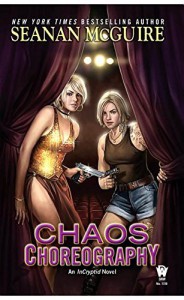 Verity Price is back on the West Coast and getting back into the swing of the family business: cryptozoology. She’s rescuing cryptids from bad situations, protecting them from monster-hunters, and generally risking life and limb for the greater good, with her ex-Covenant partner/husband, Dominic, by her side. Her ballroom dance career is behind her—or so she thinks. When Verity gets the call from the producers of Dance or Die, the reality show she almost won several years before, she finds the lure impossible to resist, and she and Dominic are off to L.A. for one last shot at the big time.

Of course, nothing is that simple. When two contestants turn up dead, Verity will need every ally she can find with the investigation, without blowing her cover…

True confessions time: back in the days when I owned a telly, I was a happy addict to Dancing With the Stars, glued to the waltzes, rhumbas, and tangos performed by be-sequined celebrities and their professional dance partners. I listened with bated breath as the judges rated their performances and urged them to “give it a little more welly.” Reading this novel was like going back to those days for a few hours, without paying for cable, as Verity (in her persona as Valerie) is summoned to perform again on Dance or Die.

I have rhapsodized in other reviews about how wonderful I consider McGuire’s invention of the Aeslin mice to be—I adore these tiny sapient rodents, their love of cheese and cake, their fierce dedication to the people whom they have chosen to worship, and their general good humour and willingness perform tasks that larger creatures might shrink from. The mice are as charming as usual, although I wish they had received slightly more air time. Perhaps I always wish for that?

I have rated this book at four stars, because I did inhale it in one evening (as I have all of the InCryptid books, truthfully). I was somewhat dismayed, however, to find a kind of repeat villain in the form of Yet Another Snake Cult (let me speak in capitalized words, as the mice do). The temptation to knock off a star or at least half of one was strong.

However, we do get to meet Verity’s renowned grandmother, Alice, who is much quoted in the earlier volumes. We also get caught up to speed on Verity & Dominic, who apparently got married in Vegas (inexplicably on their way from New York to Oregon—geography must be different in the InCryptid universe).

An acceptable addition to the InCryptid canon, the sacred scriptures of the Aeslin mice.