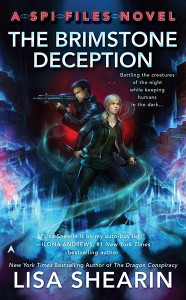 The agents of Supernatural Protection & Investigations (SPI) know that fighting evil is a full-time job, especially when a new designer drug—with mind-blowing side effects—hits the streets...

It’s called Brimstone. And after the first few hits, you’ll see every supernatural beast sharing the sidewalk, train, or office with you. After that, you’ll start seeing the really scary stuff.

I’m Makenna Fraser, seer for the SPI. And the collateral damage caused by Brimstone is something I’d like to unsee: dead drug dealers missing their hearts—and souls. Because your local pusher doesn’t stand a chance against the new cartel muscling its way into New York. And since the drug can only be produced with magic and molten brimstone fresh from Hell, that means a rift to the underworld is open somewhere in the city.

And when—not if—the cartel loses control of it, well...

It’s going to be Hell on earth.

The SPI Files is a delightful series! I will be anxiously awaiting book 4 in 2017.

Makenna is a charming main character—a seemingly ordinary woman with an extraordinary ability (to see through magic glamours) but who knows her limitations. She knows that she will never be able to kick butt like many of her fellow SPI agents, but allows them to do their thing while she does hers. On the theory that one should be a pleasant coworker as well as a useful one, she is always quick with a quip or a smart remark to break the tension.

One of the things that I appreciate about the series is that there is very little swearing—cuss words are used sparingly and when they are appropriate. One of the lessons my mama taught me: swearing all the time takes all the magical shock value out of the words. If you rarely swear, when you do people sit up and pay attention. Save it for when you really need folks to take you seriously. It works! And Shearin has obviously had similar coaching.

I know that some readers will also be frustrated with the glacial slowness of the romantic subplot of the SPI files too. For me, that is another one of its charms. Love is in the air? Hand me a gasmask! Eventually, however, the author will have to fish or cut bait.

It will be difficult to wait a whole year for the next installment.