Waking Up to the Dark / Clark Strand 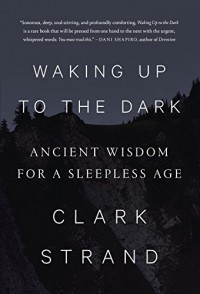 What a weirdly interesting little book! I heard the author interviewed on CBC radio and was intrigued. He starts the book by recounting a story: that when home electricity was first introduced, people were horrified by the result. Suddenly, it was easily seen how tatty and dirty their homes were. You could tell how worn down the furniture was or that you hadn’t scrubbed the walls for a while. It was the beginning of ushering in our era of consumerism and the desire for a show-case type home.

That was the hook. That and the fact that I’m aware of the issue of light pollution and that I’m longing to find some time to spend out in the countryside, gazing at the night sky. So imagine my surprise when I got a book of mysticism—the author has spent time in a Buddhist monastery and has studied Paleolithic art, the Black Madonna, the role of Mary in Christianity, among other esoteric subjects.

He recounts his own history, starting with middle-of-the-night walks as a boy to seeking darkened environments as an adult and the spiritual experiences that he has had as a result of this. His main thesis seems to be that we have let electricity (lights, televisions, computers, smartphones, etc.) take over our lives and lead us into imbalance with the natural world and with our spiritual selves. Living in the middle of a city of over a million people, I have sympathy for this outlook. I just this morning had to explain to a well-meaning coworker that I don’t have a television nor do I pay for home internet, so I had not seen a particular TV show. I spend 7-8 hours a day working at a computer and my shoulders & arms hurt from it. I do whatever I can to reduce my time at staring at screens outside work hours.

I was somewhat surprised that the author seemed so unaware of the concept of Gaia, the female personification of the Earth and all of the goddess traditions. He was startled when the darkness in female form spoke to him. But as he admits, even the Buddhist tradition is very male-centred, tracing back through male teachers to Buddha.

I also found him rather fatalistic—implying that humanity will have to be wiped out by Our Lady of Climate Change before balance can be restored. Even someone like me, who would enjoy more darkness for various reasons, can’t imagine giving up electric cooking and lighting or completely giving up the internet (especially my book sites like Booklikes).

Interesting, thought provoking, well-meaning. But like Mark Boyle’s book The Moneyless Man, I wonder how practical it is in the long run.