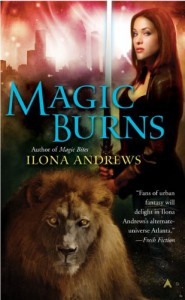 Down in Atlanta, tempers – and temperatures – are about to flare…

As a mercenary who cleans up after magic gone wrong, Kate Daniels has seen her share of occupational hazards. Normally, waves of paranormal energy ebb and flow across Atlanta like a tide. But once every seven years, a flare comes, a time when magic runs rampant. Now Kate’s going to have to deal with problems on a much bigger scale: a divine one.

When Kate sets out to retrieve a set of stolen maps for the Pack, Atlanta’s paramilitary clan of shapeshifters, she quickly realizes much more at stake. During a flare, gods and goddesses can manifest – and battle for power. The stolen maps are only the opening gambit in an epic tug-of-war between two gods hoping for rebirth. And if Kate can’t stop the cataclysmic showdown, the city may not survive…

Is it just me, or have the writing team here taken a page from Shakespeare, specifically The Taming of the Shrew? With the main character being named Kate, I have to wonder. Curran has obviously been cast in the role of Petruchio, tormenting the unwilling Kate, who is stubbornly resisting him.

This is a story line of some antiquity and it continues to entertain us to this day. I do look a bit askance at it, as it would seem to reinforce that male belief that “no” just means “be more persistent.” Despite these reservations, I did enjoy the story and will undoubtedly be picking up the third book in the series (remembering, after all, that this is entertainment and fantasy and not a blue print for life).

I do enjoy Kate—her self-reliance, her strength, and her determination to succeed. Like all of us, she sometimes lacks a bit of perspective on her life, but she is as honest as she is able to be. I thought the introduction of the child, Julie, allowed the authors to let Kate reflect on her own life, thereby giving the reader some background without it just being a huge info dump.

Most enjoyable and I will anticipate book 3 with pleasure.