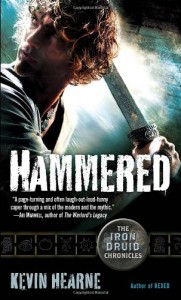 Thor, the Norse god of thunder, is worse than a blowhard and a bully—he’s ruined countless lives and killed scores of innocents. After centuries, Viking vampire Leif Helgarson is ready to get his vengeance, and he’s asked his friend Atticus O’Sullivan, the last of the Druids, to help take down this Norse nightmare.

One survival strategy has worked for Atticus for more than two thousand years: stay away from the guy with the lightning bolts. But things are heating up in Atticus’s home base of Tempe, Arizona. There’s a vampire turf war brewing, and Russian demon hunters who call themselves the Hammers of God are running rampant. Despite multiple warnings and portents of dire consequences, Atticus and Leif journey to the Norse plain of Asgard, where they team up with a werewolf, a sorcerer, and an army of frost giants for an epic showdown against vicious Valkyries, angry gods, and the hammer-wielding Thunder Thug himself.

This novel in the series was disappointing to me. I didn’t like Atticus as much as usual—and I’m often willing to cut the author some slack if I love the characters. I think that’s one of the problems for me with this one—there’s much less Oberon wolfhound extraordinaire, less of Druid-apprentice Granuaile, less of the whisky drinking widow, all of whom make these novels pleasant for me. Taking the action out of Arizona and moving it to the Norse realm left out many of the elements that allow Atticus to show himself to be a decent guy. Instead, he has been drawn into a revenge plot that he actually has no stake in besides keeping his word. Indeed, by insisting on keeping his word, he is drawn into a thoroughly no-win situation, ignoring excellent advice given to him by both Jesus and Flidais, and neglecting his responsibilities in Midgard/Arizona.

Too much of the book required tenuous connections using various “hammer” puns. Plus, the whole section with the Hammer of God zealots and Jesus was actually in questionable taste, in my opinion, despite my lack of religious affiliation. It’s risky business to poke the bear of current religions, although I think it’s fair to show them as equal to Norse paganism or the ancient Irish religion.

I did enjoy Atticus and Leif’s dueling Shakespeare quotations, as well the pop culture references. I’m almost reluctantly drawn towards the fourth book, just to see how things work out.