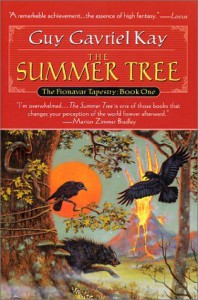 Five men and women find themselves flung into the magical land of Fionavar, First of all Worlds. They have been called there by the mage Loren Silvercloak, and quickly find themselves drawn into the complex tapestry of events. For Kim, Paul, Kevin, Jennifer and Dave all have their own part to play in the coming battle against the forces of evil led by the fallen god Rakoth Maugrim and his dark hordes.

This is Guy Gavriel Kay’s earliest published novel. I’m sure there were previous books that didn’t get published, because you don’t become such a skilled writer without plenty of practice. To be fair, I have previously read two of his more recent novels (set in Ancient China) which are masterful and The Summer Tree is very obviously an early entry in his oeuvre. It is very complex, there are many characters, and there is a LOT going on. A very ambitious novel.

Okay, up front I have to say that I adore the King Arthur story cycle and I have a true love for Norse and British mythology. Plus, I have a serious love affair with Tolkien’s Lord of the Rings. These predilections predispose me to love this novel and this series. It makes complete sense to me that Kay, who worked with Christopher Tolkien to get The Silmarillion edited to publish, would be heavily influenced by Tolkien’s world.

What I appreciate is his spin on things Tolkien. Yes, there are dwarves who delve in the earth and there are elf-equivalents (lios alfar) but they behave in GGK ways, not just Tolkien ways. He also takes a page from Donaldson (the Thomas Covenant series) in having modern people transported into an alternate world, but in my opinion he does it so much better (by orders of magnitude). Plus, instead of just being a completely different world with different rules, Fionavar is related to our world. Fionavar is the master copy and our world is one of many versions of it.

Also a plus for me was prominent female characters with substantial roles to play in the action, although (view spoiler)[I was disappointed that all he could think of to torment Jennifer was overwhelming sexual assault. (hide spoiler)]

I hadn’t meant to read the second book until sometime in January, but somehow I just grabbed The Wandering Fire and plunged back into the story immediately. I expect I will be too involved to pause between it and The Darkest Road either. One of the benefits of reading an older series is not having to wait for the next installment. A complete joy to read.

Possibly, because I know it is not on par with Kay’s more recent works, I should give it a 4 star rating, but I enjoyed it so much that it’s getting 5 stars.