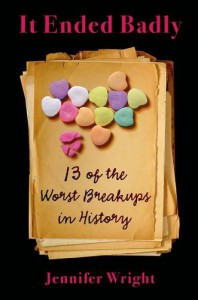 “No one gossips about other people’s secret virtues.”—Bertrand Russell

How true! What fun would that be? And this book is fun and snarky. In a very 21st century way, the author discusses some of the most prominent romantic break-ups in history. It can be difficult to judge the past by their own standards, so let’s not, just for the duration of this little book. Get all judgey with 21st century values and giggle while you do it.

There are poets behaving badly (Lord Byron), Romans behaving viciously (Nero), and rather sad tales, like Oscar Wilde (eventually abandoned by the guy that he went to jail for). Then there are the ladies who won the public relations battle—Elizabeth Taylor and Debbie Reynolds, whose friendship outlasted both of their marriages to Eddie Fischer.

Light & frothy, just the thing to get you interested in reading serious biographies of some of these people, and a wonderful change from heavier fare.