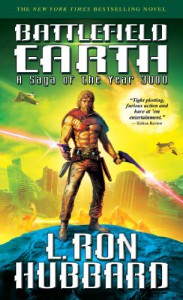 Earth has been dominated for 1,000 years by an alien invader—and man is an endangered species. From the handful of surviving humans a courageous leader emerges—Jonnie Goodboy Tyler, who challenges the invincible might of the alien Psychlo empire in a battle of epic scale, danger and intrigue with the fate of the Earth and of the universe in the tenuous balance.

My kingdom for an editor! At over 1000 pages, this novel really needed one, but I guess it’s not so easy to edit a paranoid madman (for that’s what L. Ron Hubbard was at this point). He states in the introduction that he didn’t make any effort to contain himself while writing Battlefield Earth and it shows. What also shows is the era when Hubbard did the majority of his science fiction writing. Battlefield Earth may have been published in the 1980s, but it reads much more like a novel of the 1950s.

The main character is Jonnie Goodboy Tyler. That middle name says it all really. Tyler is very much a Gary Stu character—he can and does learn anything. He masters the language of the invading aliens, the Psychlos. Despite coming from a material culture that has been reduced to the horse, he easily adapts to machines. He also becomes an expert diplomat after a half hour of coaching from one of his assistants. Also telling is that computers are not introduced until very much towards the end of the novel—just like the Lensman series of E.E. Smith, complicated craft are run without their benefit. This makes sense, as in the late 1970s computers were uncommon and expensive (so it also makes sense that the first characters in the book to use them are the inter-galactic bankers). Plus, Hubbard had been isolated from mainstream society for years, hiding from the authorities on his ship, and may have been unaware of the importance of computers in aviation.

Another 1950s aspect to the novel is Jonnie’s relationship with Chrissie, his love interest. In the beginning, he barely acknowledges her and during her ordeal of being held captive by Terl, a Pscyhlo who needs leverage over Jonnie, the most contact they have is an almost-hand-holding incident. Somewhere after page 990, they finally get to embrace. By book’s end, they have two children, leaving the reader to assume that they eventually get beyond the embrace. It is ironic that in his introduction to the novel, Hubbard admonishes other writers that sci fi is more about people than about science and then he goes on to create absolutely wooden, almost-emotionless characters. The best realized emotion is anger (something that may accurately reflect Hubbard himself).

What I found truly fascinating was the duality of Jonnie and Terl (his Psychlo captor). Jonnie is upright, able to do anything, a leader of men, smart—in short everything good thing that Hubbard liked to believe he himself possessed. Terl, one of the Psychlo overlords, is almost a parody of a sadistic, crazy-like-a-fox bad guy. He is cunning, given to fits of temper, a substance abuser, cares about no one but himself, and is acknowledged as being mentally unstable. This being the description of Hubbard the Scientology leader, especially in his later years (when this novel was published), one wonders how much of himself he realized that he was channeling into this character!

Incidentally, it seems that bad guys always smell bad. The Psychlos are furry, mangy and stinky. The Brigantes, a nasty human tribe, are not only cannibals but don’t wash and can often be smelled before they are seen.

By about page 530, I was wondering why in the world I was reading this monstrosity. By about page 770, I was actually committed to finishing and wanted to know how in the world Hubbard would wrap things up. Turns out, Battlefield Earth is 1066 pages written in order for Hubbard to stick out his tongue at the psychiatric profession! Hubbard spent his entire life trying to be the one in control, controlled by no one. Jonnie actually manages that (and goes one better, as he not only runs Earth, but out manoeuvres other planetary races plus the inter-galactic bank). Hubbard has fun with his depiction of the bankers (they seem to be descended from sharks and have insatiable appetites), but he saves his venom for the psychiatric field. It turns out that it was it was evil “catrists” (i.e. psychiatrists) who took the smartest among the Psychlo population (Hubbard calls them the “brain-brains”), recruited them to the Security Service, and taught only them the valuable secrets of controlling inter-galactic trade. No one knew the previous name of the race—they were known as Psychlos, after the evil people who conquered them from within. All non-security members of the race have brain implants that kill them if they try to even think about maths and sciences.

This is richly ironic, as Hubbard probably wished for such a mind control device often, when dealing with his Scientology followers, who had an unfortunate tendency to think for themselves! He worked hard to set up a very punitive system to keep them in line and thinking only what he wanted them to think.

In real life, Hubbard hated psychiatry (probably because they could have recognized his mental illness and would have confined him for treatment). There is a point in the book where Jonnie realizes that he has “cured himself of an injury through the power of his mind,” a not-so-subtle plug for Hubbard’s Dianetics program. No wonder this novel is so popular among Scientologists (including John Travolta who insisted in starring in the dog of a movie).

This is book 191 in my science fiction and fantasy reading project.