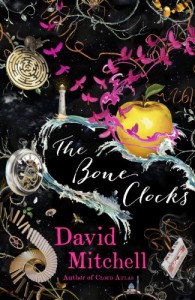 Following a scalding row with her mother, fifteen-year-old Holly Sykes slams the door on her old life. But Holly is no typical teenage runaway: a sensitive child once contacted by voices she knew only as “the radio people,” Holly is a lightning rod for psychic phenomena. Now, as she wanders deeper into the English countryside, visions and coincidences reorder her reality until they assume the aura of a nightmare brought to life.

For Holly has caught the attention of a cabal of dangerous mystics—and their enemies. But her lost weekend is merely the prelude to a shocking disappearance that leaves her family irrevocably scarred. This unsolved mystery will echo through every decade of Holly’s life, affecting all the people Holly loves—even the ones who are not yet born.

What a difficult book to review! Compounded by the fact that I had to take a hiatus in the middle of the book to deal with a dead refrigerator—the new one couldn’t be delivered for 2 weeks and, as I camped in my own kitchen, I found I didn’t have the energy for The Bone Clocks or anything much else.

Despite these complications, I did really enjoy the book, especially when I picked it up the second time to finish it. (Feeling the pressure to have it read before book club and knowing there were holds waiting at the public library both helped push me back into reading it).

I really liked Holly Sykes and was glad that she was such an integral character all through the novel. Even in the Crispin Hershey section, there she was, intruding into his consciousness. I even became somewhat sympathetic to crusty, cranky Hershey. I have to wonder how much of himself the author injected into Hershey and how much was borrowed from the lives of others (apparently including Martin Amis, if the critics are to be believed).

I enjoyed the flow of language and there were many turns of phrase that I found lovely. Having never read any other works by Mr. Mitchell, I couldn’t appreciate the links to his other works through re-appearing characters. However, I am familiar with the concept, having enjoyed that phenomenon in the works of Kurt Vonnegut. (Kilgore Trout, anyone?)

The fantasy elements of the novel are nothing new to a science fiction & fantasy fan such as myself, but I can see where they would be disquieting to the serious literary crowd. I thought that the presence of the Horologists shook me out of the here-and-now, asking me to consider life decades down the road. There was a very strong environmental consciousness which culminates at the novel’s end, making one think of the consequences of just living life in the now, not thinking ahead. Recalling the Biblical story, we are being inconsiderate grasshoppers right now, enjoying our privileges and ruining things for future generations, when we should be industrious ants, getting a handle on conspicuous consumption and mindless carbon emissions. And yet, how hard it is to give up my car! Alas for difficult choices!