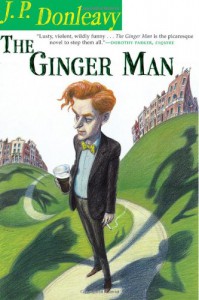 First published in Paris in 1955 and originally banned in America, J. P. Donleavy's first novel is now recognized the world over as a masterpiece and a modern classic of the highest order. Set in Ireland just after World War II, The Ginger Man is J. P. Donleavy's wildly funny, picaresque classic novel of the misadventures of Sebastian Dangerfield, a young American ne'er-do-well studying at Trinity College in Dublin. Dangerfield's appetite for women, liquor, and general roguishness is insatiable--and he satisfies it with endless charm.

Before starting this novel, it would be helpful to review two definitions:

1. Satire: the use of humor, irony, exaggeration, or ridicule to expose and criticize people's stupidity or vices, particularly in the context of contemporary politics and other topical issues.

2. Picaresque: of or relating to an episodic style of fiction dealing with the adventures of a rough and dishonest but appealing hero.

I started reading The Ginger Man without reviewing those principles and nearly quit in disgust. Even after getting those concepts clear in my head, I was able to merely tolerate the main character. Sebastian Dangerfield is truly a bastard, totally consumed with drinking, smoking, eating, and seducing women, all while doing absolutely no work (or study) and paying as few bills as possible. In other words, I had great difficulty with seeing him as an appealing main character.

You’ve probably run into one of these characters at some point in your life—if he would just put as much effort into a job as he puts into avoiding getting a job, he would have the money that he so desperately desires. Those of us who live responsible lives watch these cads with fascination and revulsion—most of us wouldn’t be able to withstand the mental strain that they navigate on a daily basis, leading me to believe that they are either narcissists or sociopaths, who simply don’t feel the responsibilities of civilized life in the way that most of us do. [Wikipedia informs me that this book is reputedly semi-autobiographical for Donleavy, making me wonder what kind of person he is].

I’ve also read a later book of Donleavy’s, The Beastly Beatitudes of Balthazar B, which is somewhat different in tone. Balthazar is a somewhat more sympathetic character, portrayed as a confused victim in life, manipulated by those around him (somewhat like O’Keefe in The Ginger Man). But Balthazar’s friend Beefy is another version of Dangerfield. I’m also curious about the title, The Ginger Man. It is never explained and Dangerfield doesn’t refer to himself as the ginger man until page 255 and not again until the very last page. If the cover is any indication, it refers to Dangerfield’s hair colour, as he is illustrated as a red head. So that remains a bit of a question in my mind.

Part of my issue, I am sure, is that I am female and tend to identify with the women in the novel. I was frustrated with their behaviour as well. Why in the world would his wife leave Sebastian a forwarding address the first time she left him? And those single women whom Sebastian seduces—what in the world do they see in him? I want to shake each and every one of them!

One of my female friends recommended Donleavy’s writing to me and I chose this book because it was on the Modern Library’s list of 100 top novels. Obviously other people find it amusing and worthwhile to read. I cannot count myself among them, however, despite the skillfulness of the writing. I think this is the last Donleavy work that I will read. There are too many books that I’m sure I will enjoy to spend my valuable reading time on this author.