The Back of the Turtle / Thomas King 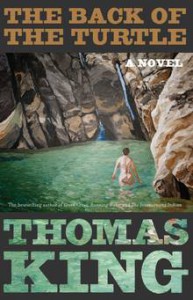 In The Back of the Turtle, Gabriel returns to Smoke River, the reserve where his mother grew up and to which she returned with Gabriel’s sister. The reserve is deserted after an environmental disaster killed the population, including Gabriel’s family, and the wildlife. Gabriel, a brilliant scientist working for DowSanto, created GreenSweep, and indirectly led to the crisis. Now he has come to see the damage and to kill himself in the sea. But as he prepares to let the water take him, he sees a young girl in the waves. Plunging in, he saves her, and soon is saving others. Who are these people with their long black hair and almond eyes who have fallen from the sky?

Filled with brilliant characters, trademark wit, wordplay and a thorough knowledge of native myth and story-telling, this novel is a masterpiece by one of our most important writers.

My first Thomas King novel, but undoubtedly not my last. When I started this novel, I was somewhat reluctant—reading something recommended, rather like taking medicine. Promised good results, but feeling it was a bit of a chore.

That feeling was completely gone within the first chapter. The cast of characters (and they are characters) are charming, even the poor CEO, Dorian, who I came to pity. The scientist, Gabriel, who obliquely caused an event known as The Ruin, comes home to the scene of the crime, intending to see the devastation he caused and to commit suicide. However good he may be at creating toxic substances (the ironically named GreenSweep), he is not very good at self-destruction. He meets a woman who used to live on the Smoke River Reserve that was closed after The Ruin (Mara), the keeper of the hotsprings who speaks in biblical phraseology (Nicholas Crisp), and a young boy who survives by salvaging items from the beach (Sonny).

You cannot help but care for all of these people, who are finding their way in the wake of the disaster, taking care of each other to greater or lesser extents. Their stories are in marked contrast to the CEO of the company which caused the disaster, Dorian who runs Domidion. King takes a lot of pokes at our current system of capitalism through the life of Dorian. One of Dorian’s main scientists has gone missing and can’t be found (that would be Gabriel). Two dams on tailings ponds in the Athabasca area have broken, releasing toxic sludge into the Mackenzie River system and eventually the Arctic Ocean. While investigating this disaster, the media learns of the defection of Gabriel and the connection to GreenSweep and the Smoke River Reserve—Dorian is only saved from disaster by the advent of a bigger news story. But his wife has left him and he is reduced to shopping to try to make himself feel better. We witness his random purchases—expensive ties, extravagant watches, exclusive scent. When he arrives home and is still sad, he attributes the feeling to the fact that he did not buy TWO watches, when really how many watches can one person wear? He truly is the poor little rich man.

Despite its very intelligent swipes at capitalism, environmental problems, consumerism and the like, this is a highly engaging, highly entertaining work which will leave you with a good feeling about the world.