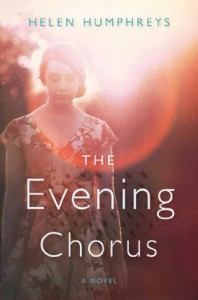 Resigned to living out the Second World War in a German POW camp, James Hunter, an English officer, begins studying a pair of redstarts near the camp. His interest in the birds captures the attention of the Kommandant and gives James cause to fear for his life. Meanwhile, back in England, James's young wife, Rose, falls headlong into a passionate affair with another man. When James's sister, Enid, is bombed out of her London flat, she comes to stay with Rose, and the two women form a surprising friendship that alters the course of both of their lives.

What a beautifully written book! Under normal circumstances, I avoid books about World War II like the plague. By and large, they do not appeal to me. But how could I resist a book in which one of the main characters, James, a POW in Germany, studies a pair of Redstarts (those are birds, for the non-birders out there) as a way to see himself through the war.

Birds are one of the ways to my heart and this book wiggled its way in quickly. I found it amazing how well I felt I knew the various characters and how strongly I felt for each of them despite the sparseness of the writing. There are no extraneous words, no awkward phrases, just gracefulness.

There were so many contrasts: James watching the birds while the German guards watched him. The freedom of the Redstarts compared with the confinement of the prisoners. The misinterpreted kindness of the Kommandant with the brutality of some of his men. The real lives of both Germans and POWs compared with their current posting.

The women, Rose and Enid, are no less interesting and all of them find some solace in the natural world. Since the outdoors and bird watching have been responsible for healing many of my own wounds, I guess I am predisposed to find this book uplifting. Because I could see something wonderful the next time I go out looking—and isn’t that something worth living for?