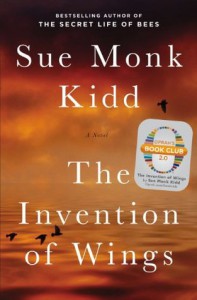 Hetty "Handful” Grimke, an urban slave in early nineteenth century Charleston, yearns for life beyond the suffocating walls that enclose her within the wealthy Grimke household. The Grimke’s daughter, Sarah, has known from an early age she is meant to do something large in the world, but she is hemmed in by the limits imposed on women.

Kidd’s sweeping novel is set in motion on Sarah’s eleventh birthday, when she is given ownership of ten year old Handful, who is to be her handmaid.We follow their remarkable journeys over the next thirty-five years, as both strive for a life of their own, dramatically shaping each other’s destinies and forming a complex relationship marked by guilt, defiance, estrangement and the uneasy ways of love.
As the stories build to a riveting climax, Handful will endure loss and sorrow, finding courage and a sense of self in the process. Sarah will experience crushed hopes, betrayal, unrequited love, and ostracism before leaving Charleston to find her place alongside her fearless younger sister, Angelina, as one of the early pioneers in the abolition and women’s rights movements.

Inspired by the historical figure of Sarah Grimke, Kidd goes beyond the record to flesh out the rich interior lives of all of her characters, both real and invented, including Handful’s cunning mother, Charlotte, who courts danger in her search for something better.

I think this book and Gone With the Wind would be like matter and antimatter—if you sat them side by side on the shelf, I would expect that they would mutually annihilate each other! Despite being written about the same society and set during the same time period, they could not be more different.

Gone With the Wind is told exclusively from a white, southern view point. The Invention of Wings is told by two, equally important narrators, one white and one black. While Scarlet O’Hara is beautiful and knows how to play the society game, Sarah is plain, awkward, and has a speech impediment. Scarlet’s life revolves around various men, but Sarah refuses to lose herself in the role of wife. Scarlet is all about survival on her own terms, while Sarah is devoted to the causes of abolition and women’s rights.

It was my feeling that the chapters devoted to Sarah were the best ones. The chapters recounting Handful’s side of the story were good, but not as heartfelt. For a more authentic description of the black experience of slavery, I would recommend Octavia Butler’s Kindred, which I often had to set down for a while to get my breathing and heart-rate under control—her descriptions were that harrowing. As an African-American writer, Butler was willing to be absolutely unflinching in her descriptions. I am sure there are plenty of other African-American authors out there who have done similar things in their fiction, I just haven’t read them yet. [I am often reluctant to read about how terribly human beings are willing to treat each other, avoiding WWII, slavery, and genocide in my reading].

I was interested to learn that Sarah and her sister were historical figures that Kidd was curious about. They had that perfect combination: some historical records, but nothing too constricting. There was room to work with the facts available, to fill in the blanks, so to speak.

This book probably deserves more than 3 stars, but it is about subject matter that doesn’t thrill me, hence my “I like it” rating, rather than anything higher.