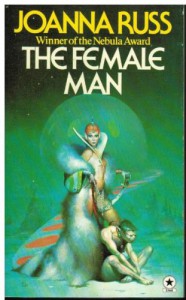 Living in an altered past that never saw the end of the Great Depression, Jeannine, a librarian, is waiting to be married. Joanna lives in a different version of reality: she's a 1970s feminist trying to succeed in a man's world. Janet is from Whileaway, a utopian earth where only women exist. And Jael is a warrior with steel teeth and catlike retractable claws, from an earth with separate - and warring - female and male societies. When these four women meet, the results are startling, outrageous and subversive.

Feminism has evolved and changed over the decades and this book was written during the Second Wave of Feminism (often referred to as Women’s Lib) during the 1960s-1970s. I know that it is difficult for young women born in the 1980s and later to believe some of these things, but there was a time when your career options as a woman were very limited—you could be a nurse, teacher, secretary, or a housewife. When I was in high school in the 70s and making high academic marks, I was strongly discouraged from taking typing classes (something akin to some of the keyboarding classes offered today, but with archaic typewriters rather than computer keyboards) because I was being encouraged to think of myself as a potential manager, rather than a secretary. In those days, bosses dictated their letters and secretaries typed them—no self-respecting man knew how to type. Even if you worked in one of these roles outside the home, it was expected that when you became pregnant, you would quit your job—often, your employer would helpfully fire you to make room for a replacement who was not pregnant. After all, women just worked for “pin money,” to supplement the household income for the fripperies that all women desire (which of course justified paying them very little, as they weren’t “supporting a household” the way that men were supposedly doing). Hard to believe in these days when there are more young women in universities than young men, isn’t it? Now, women are free to become doctors and lawyers, professions which to all intents and purposes barred female students until recently, or to take any other university courses that they desire.

Birth control drugs were not an established thing—the pill was just coming on to the market during these decades and was not always easily available. Doctors were men, generally speaking, and reserved the right to tell you whether you were worthy of birth control. And this was an improvement from earlier years when people could be arrested for giving out information on various birth control methods.

If you were female and unmarried by your mid-20s, you were pitied. Poor thing, you’d never be a whole person and never have children. Being a wife and mother was the be-all and end-all. I don’t think it even crossed most people’s minds that you might be a lesbian, because there were so few women who were out of the closet. Sure, a few folks might say “nasty” things like that behind your back, but most people just considered you pitiable.

So, the Feminist Movement of this time period was very much a reaction against enforced domesticity. Women had acquired the right to vote, but really didn’t have many options in other facets of their lives. The patriarchy was still firmly in place, and feminists had to roar in order to be acknowledged or heard at all, let alone change the status quo. They burned bras (as symbols of their sexualization for the benefit of men), and they demanded equal pay, equal educational opportunities, and equal access to the job market. Some of the more dedicated feminists declared themselves political lesbians, to protest society’s ingrained sexism and “compulsory heterosexuality.” They were removing themselves from the patriarchal structure in the only way they could find and in a way that (during those years) was guaranteed to shock.

We’ve come a long way, baby! And if you don’t understand this background, you also won’t understand The Female Man. Russ shows just how much male privilege dominated, how inferior women were assumed to be. We still have a way to go [see for example, the Jian Ghomeshi scandal at CBC or the lack of a sexual harassment procedure on Parliament Hill—places where men still seem to hold the balance of power]. Male entitlement still exists, but it's circle is shrinking. As Russ says as the end of the book, won’t it be a happy day when readers of this book don’t understand what she’s on about?

This is book 153 in my science fiction/fantasy reading project.